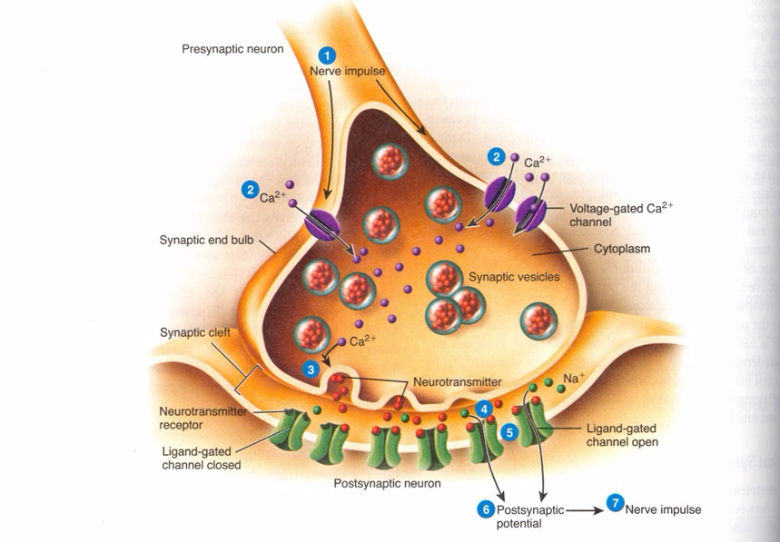 The main benefits of SSRI antidepressants are believed to involve a chemical in the brain called serotonin. Serotonin is one of theneurotransmitter chemicals important in communication between nerve cells. When a nerve cell is activated, a neurotransmitter is released from the nerve cell ending or terminal. The neurotransmitter then moves by diffusion across the small space (synapse) between the cell and its neighboring cells, and becomes attached or bound to a specific receptor molecule on the neighboring cells. This attachment between neurotransmitter and receptor causes changes in the electrical properties of the neighboring cells. In this way, the first cell has communicated with its neighbors. In order to turn off the effect of the neurotransmitter, in a process called re-uptake molecular pumps in the terminal of the first cell rapidly remove the neurotransmitter molecules by pumping them back into the first cell to be re-packaged for later release. Many antidepressants work by blocking or “inhibiting” the action of these re-uptake pumps. Paroxetine (Paxil®), sertraline (Zoloft®), fluoxetine (Prozac®), fluvoxamine (Luvox®), escitalopram (Lexapro®), and citalopram (Celexa®) have these effects only on the serotonin system (thus, Serotonin Specific Re-uptake Inhibitors”). Because the re-uptake pump is blocked, more neurotransmitter is available to affect the neighboring cells. In a process called downregulation, the neighboring cells react to this by gradually removing some fraction of the receptor molecules on their cell surfaces. This removal process requires several weeks to complete, which is very similar to the amount of time required for an antidepressant to begin working. This suggests that depression is less likely to relate to a deficiency of serotonin, and may have more to do with how a cell controls the number, or binding characteristics, of the receptor molecules on its surface.